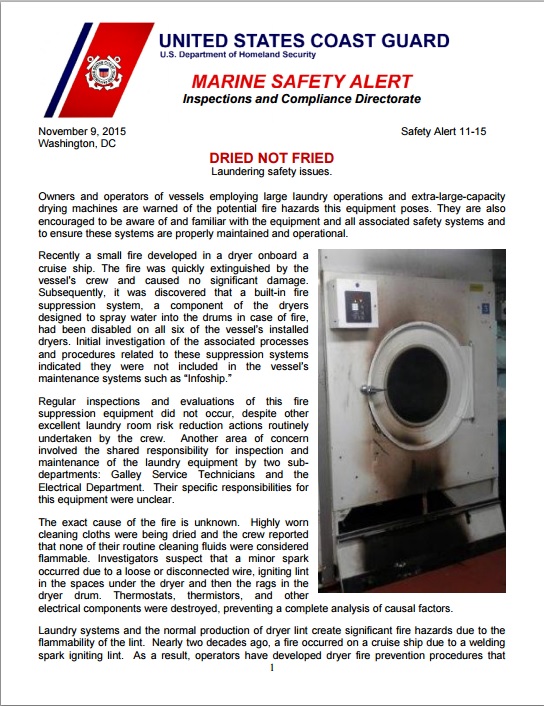 Recently a small fire developed in a dryer onboard a cruise ship. The fire was quickly extinguished by the vessel’s crew and caused no significant damage. Subsequently, it was discovered that a built-in fire suppression system, a component of the dryers designed to spray water into the drums in case of fire, had been disabled on all six of the vessel’s installed dryers. Initial investigation of the associated processes and procedures related to these suppression systems indicated they were not included in the vessel’s maintenance systems such as “Infoship.”

Regular inspections and evaluations of this fire suppression equipment did not occur, despite other excellent laundry room risk reduction actions routinely undertaken by the crew. Another area of concern involved the shared responsibility for inspection and maintenance of the laundry equipment by two subdepartments: Galley Service Technicians and the Electrical Department. Their specific responsibilities for this equipment were unclear.

The exact cause of the fire is unknown. Highly worn cleaning cloths were being dried and the crew reported that none of their routine cleaning fluids were considered flammable. Investigators suspect that a minor spark occurred due to a loose or disconnected wire, igniting lint in the spaces under the dryer and then the rags in the dryer drum. Thermostats, thermistors, and other electrical components were destroyed, preventing a complete analysis of causal factors.

Laundry systems and the normal production of dryer lint create significant fire hazards due to the flammability of the lint. Nearly two decades ago, a fire occurred on a cruise ship due to a welding spark igniting lint. As a result, operators have developed dryer fire prevention procedures that  describe the exact process for securing the equipment and cleaning the machine’s internal and external areas.

Naval publications indicate that the majority of dryer fires are caused by spontaneous combustion of residual soils, paint, edible oils, etc. Furthermore, they are also caused by human errors or negligence such as leaving dried materials unattended in the dryer; not properly washing, rinsing and extracting clothes; not cooling down dryer loads for ten minutes at ambient temperatures; improper cleaning lint traps; and damaged lint traps. Other important concerns are the need for properly operating automatic temperature controls, timing devices, cool down cycles and the absence of fire sensing and smothering devices. The involved dryer in this case was equipped with all of these components.

Although the impact of this incident was relatively small, if not for the response of the vessel’s crewmembers and firefighters, the outcome could have been much worse.